Posted on September 28, 2012 by ClaraBowmanJahn

So good to see you!

How do you get your ideas?  Last Tuesday I was on Cher Green’s blog as one of the authors who shared how she got her ideas. Here is the link http://chergreen.blogspot.com/2012/09/voices-of-fiction-where-do-you-get-your_25.html?utm_source=feedburner&utm_medium=email&ut… Hope you enjoy it. Let me know what you think in the comments. You know how I love comments. 🙂

Also an aside for blatant self promotion. I have two Facebook pages. One is my page with everyone on there; http://www.facebook.com/cbowmanjahn  this is also where my friends and family meet. I’d love to be your friend here.

And one is Annie’s page, or rather my author page.  http://www.facebook.com/ClaraBowmanJahn   and because this post is one of many where I ask you to *like* me, I’m going to ask now. Will you please *like* this page? 🙂

I bet you didn’t think I”d get to PPBF did you? Well, one more thing. Look on my header bar! See the new About Annie’s Special Day? Take a look if you dare. Now on to the business at hand. PPBF!

The author of this book is none other than one of the people in my picture book critique group and it is with great respect and admiration that I introduce her here as the author of a book I recommend for the Perfect Picture Book Friday selection. It has been my honor to get to know Sharon and share her expertise with the other members of the group. I can’t wait for sharing her with you as one of the authors in my Clarbojahn Presents series and the first post on Sharon will be next Tuesday. So now, join me in some chocolate cream pie along with your cup of mocha and let’s have a good read. 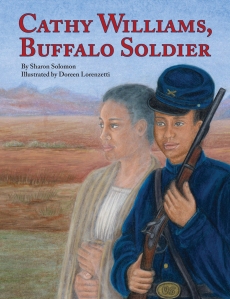 What the jacket says: Cathy Williams was the first documented woman to enlist in the United States Army. By disguising herself as a man after the Civil War, she joined the Buffalo Soldiers in protecting the expanding Western states. This regiment of African-American soldiers was a loyal group. They had the lowest desertion rate in the army even thought they operated with the worst equipment and under the harshest conditions in the military. Cathy’s efforts as a soldier earned her an adequate salary and a small place in history.

Cathy did not set out to become the first female soldier or prove that women could fight as well as men. Her goal was nothing more than to earn a living independent of friends and family. A former slave, Cathy was unable to read or write and had few employment opportunities, so she grabbed the first one she could. In doing so, she became a daring and courageous role model for all those seeking to better their lives.

First three lines: Cathy Williams was born in 1844.Although her father was a free man, her mother was a slave, making Cathy a slave. In 1848, when she was four years old, Cathy and her mother were sold to Mr. William Johnson near Jefferson City, Missouri. Cathy never saw her father again.

Resources: For a complete pdf on Buffalo Soldiers in general as well as a whole chapter on Cathy Williams go here: http://www.savannahtah.com/resources/buffalo-soldiers/buffalo-soldiers-hs-unit.pdf

http://www.readingrockets.org/calendar/blackhistory/  seems to be a site for African-Americans of all kinds. There were classroom guides and strategies.

Why I love it:Sharon Solomon captures the desperation of an African-American slave trying to earn her

living after she was freed.  Sharon tells Cathy’s story with the just the right mix of facts and adventure. The injustice of the Union Army of taking her away from her mother and forcing her to work for them is just as inhumane as slavery and the illustrations show that very well. Cathy Williams is one of many women who worked as a soldier doing what men do in the military. She is a fine example for others in her courageous desire to earn the same amount of money as her male companions. That she had to impersonate a man is no small feat. I think it is a shame that even today women make less than their male counterparts in many of the same career choices.

Please join Susanna at her blog and visit Perfect Picture Books at Susanna’s blog for lists, one on themes and one that’s alphabetized for easy selection of that perfect book for your child or pleasure. All of them have teacher guides and resource guides for easy discussion or class plans.